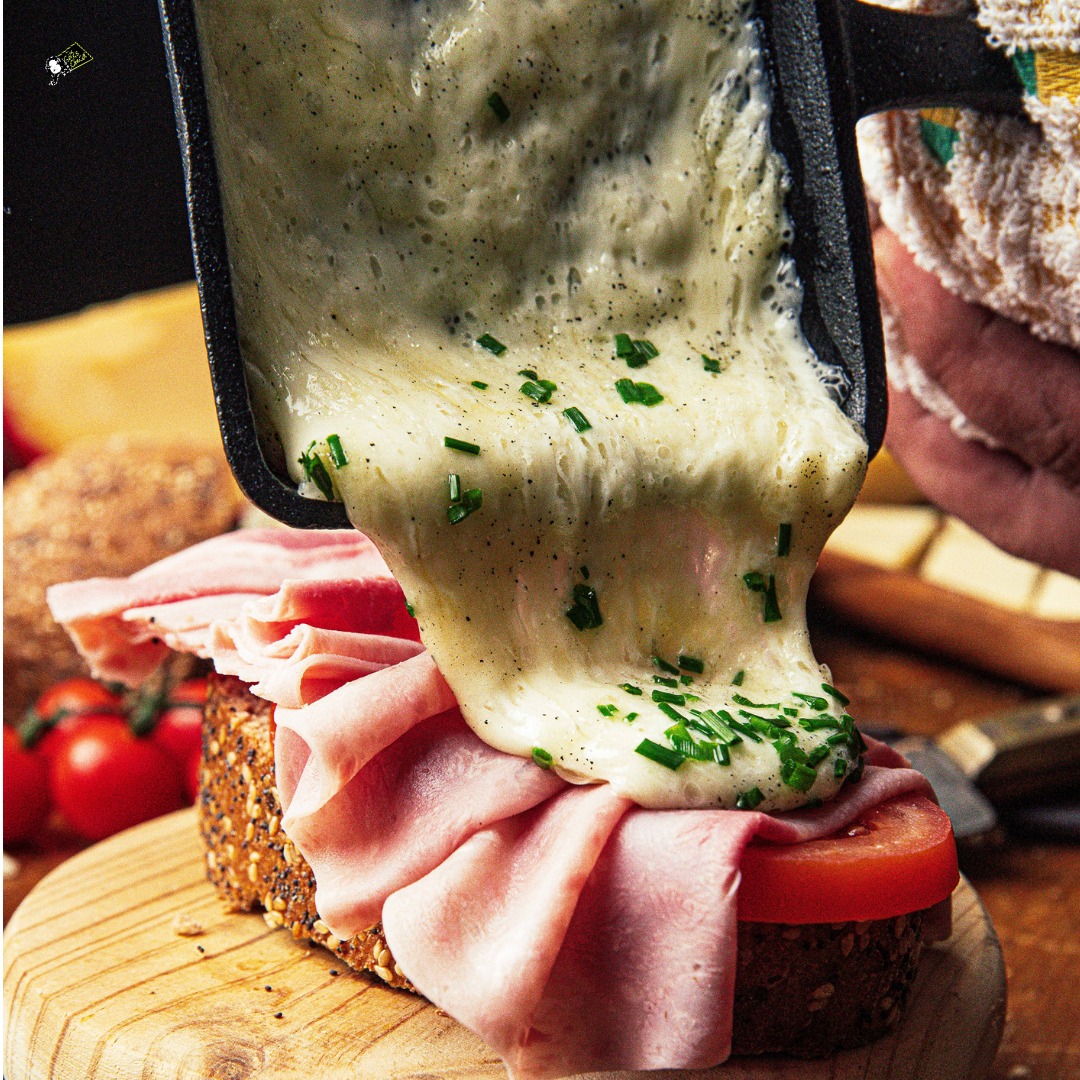 Raclette is the perfect party food. Like fondue, it’s all about melting cheese. The biggest difference is that raclette (the name of both the cheese used and the overall dish) is grilled or broiled, rather than cooked in a pot.

Typically, raclette is melted in individual portions using a special raclette grill. The cheese then is scraped onto a person’s plate over a serving of boiled potatoes, pickled onions and gherkins or cornichons (another kind of small pickle). Other accompaniments might include ham or dried beef, along with various vegetables and fresh bread.

Raclette grills usually have two levels – a top for heating vegetables or meat, and a lower broiler level for melting the cheese. Individual pans are used for melting the cheese. Raclette cheese is obviously the most popular cheese to use to for the dish. If you can’t find it, another firm, easy-melting Swiss cheese, such as Emmentaler, can be substituted.

For the marinated vegetables:

To prepare the potatoes, fill a large pot with the potatoes and enough salted water to cover them by 1 inch. Bring to a boil over medium-high and cook for 15 minutes, or until tender when pierced with a fork. Drain the potatoes, then return them to the pot, cover and place in the oven to keep warm.

While the potatoes are cooking, start the vegetables. In a medium saucepan over medium-high heat, bring the vinegar, sugar, salt, paprika and black pepper to a boil, stirring to dissolve the sugar and salt.

In a large bowl, combine the thyme, onions, red peppers, green beans and mushrooms. Pour the hot vinegar mixture over the vegetables then set aside, stirring occasionally, for 20 minutes.

To serve, follow the product directions for heating and using your raclette grill. Use a slotted spoon to transfer the marinated vegetables to a platter. Arrange the potatoes and other accompaniments in bowls or on plates at the table. Guests can heat their vegetables on the top of the grill and melt their cheese using the grill’s broiler according to product directions.

Top potatoes with the vegetables and melted cheese.

The cheese originally comes from the Valais canton, whose inhabitants also came up with the brilliant idea of melting it and pouring it all over meat and potatoes to create the dish of the same name.

But it’s widely eaten throughout Switzerland now, as well as in the eastern parts of France.

The dish is very much a winter thing – rivers of oozing melted cheese perhaps not being particularly appealing when the temperature is topping 30C (although an acquaintance of ours reports attending a summer wedding which had a raclette fountain in pride of place).

It’s particularly popular as an après ski dish, as you will need to be doing a fair amount of exercise to burn off the calories in a raclette dinner.

The formation of the dish raclette is very simple – melt some raclette cheese (special raclette grills are available for devotees, although you can also melt it under the grill) and then pour it over stuff.

Exactly what you pour it over, however, is where things get tricky.

Potatoes – usually boiled – are a staple as are sliced cold meats such as ham or charcuterie. Pickles such as cornichons and pickled onions are also pretty universal as the sharp vinegary taste is perfect to cut through the richness of the cheese.

Vegetables of the non-pickled variety are a bit of a grey area, however.

What to accompany it with?

White wine is best, or vin jaune if you’re in one of the regions that produces it, as something crisp to cut through the fatty mass of cheese is nice.

There is  a belief that you should never drink water with raclette as it will cause the cheese to solidify into a giant ball in your stomach, although quite frankly we’re not sure that medical science would back that one up.