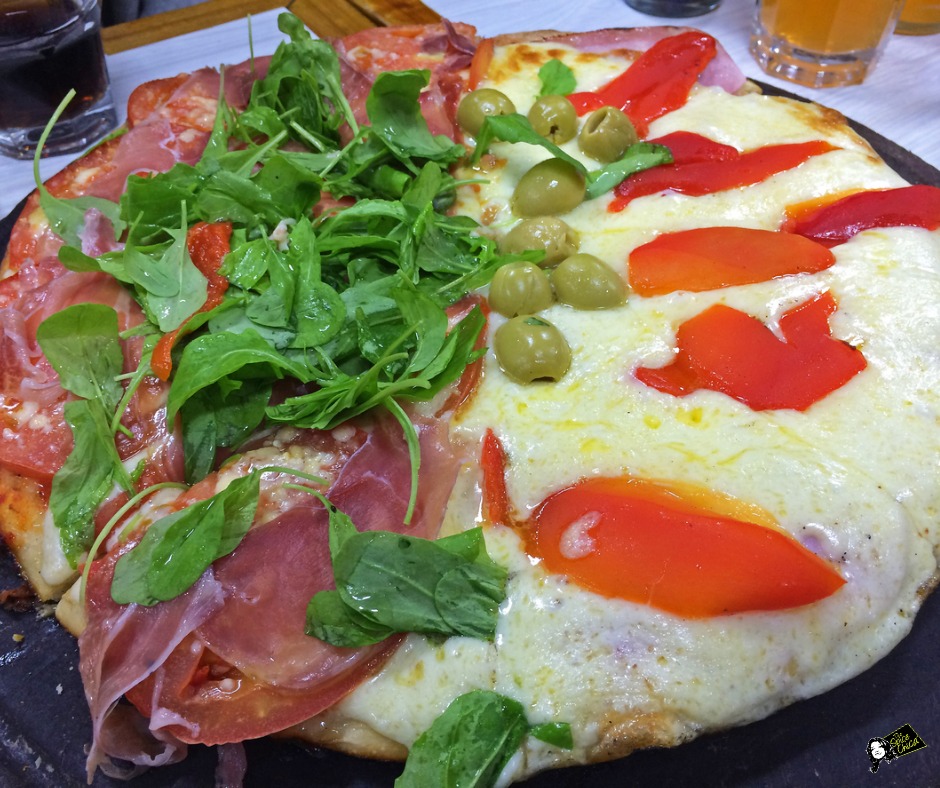 In Buenos Aires, the self-proclaimed pizza capital of South America, there are more pizzerias than steak-centric parrilla restaurants, and many locals proclaim that the high-rising, cheese-smothered slices rivals those of New York, Chicago, and Italy.
Cheese must be in abundance. “When you talk to the average Argentine about pizza, they won’t mention the dough, they will tell you about the quantity of cheese. The amount of cheese is a benchmark for quality, so the more cheese the better.”

Translating to “pizza in the pan,” pizza de molde is the most characteristic Argentine style. It has a thick, spongy base and elevated bready crust—it’s bread city, cheese paradise. Most all of the classic Porteño pizzerias specialize in pizza de molde. This style consists of a high-rising alta masa (high dough), generally reaching at least 2 cm, or a media masa (half dough) coming in at around 1.5 cm in height, and cooked in a pan. It’s similar to focaccia bread in which both the crust and inner dough have the same thick, spongy texture. When made right, the base has a sturdy crunch and the top overflows with a small amount of sauce and a lot of bubbling cheese that dreamily crisps at the bottom of the pan. Because pizza de molde is so thick and cheesy, the average eater only consumes about two slices.

Technically lives in the de molde family tree, but due to its pure oniony genius, the monster slice deserves its own category. The story goes something like this: Juan Banchero, son Italian baker Don Agustín, tried to save his dry, sub-par fugassa alla Genovese (Genoese focaccia) by slicing it down the middle and stuffing it with cheese. The result: a tomato-less pizza like none other that averages nearly two pounds of cheese per large pizza.

One of the most well-known pizzas de media masa (half dough pizza) remains a total anomaly, debunking everything we know to be true about Argentine pizza. The pizza canchera, (also known as pizza de cancha) is a cheese-less pizza covered in a red sauce and heavily seasoned with garlic, onion, and non-spicy red pepper flakes, similar to what you would find in bakeries across Southern Italy. In Buenos Aires, pizza canchera was originally sold outside soccer stadiums, hence the name: Cancha means field in Argentine Spanish. These slices tends to be shorter than most de molde pizzas, and have an airy dough, a firm crunchy base, and a lot of sauce.
Pizza a la Piedra which translates to “pizza cooked on a stone.”

In recent years, pizza a la piedra, or pizza baked on a stone. Made in a wood-fired or gas oven, this lighter slice comes out with a crispy thin crust that is slightly chewy. A good amount of tomato sauce is spread on top, along with a healthy helping of cheese and fresh toppings. Many consider this type of pizza to be more modern, and pizzerias have adapted their original concept to add this style to its repertoire.

Pizza a la Parrilla This slice features an ultra-thin crust, crackly crust.
Grilling is Argentina’s most treasured pastime, and the grill the most cherished appliance, so it’s only natural for the great parrilla to join forces with this pizza. Restaurants serving pizza a la parrilla, or pizza on the grill, give an alternative to the bready tradition while honoring another. The ultra-thin, delicate dough is grilled over hot coals on one side for five minutes, then flipped over and topped with minimal ladles of red sauce, a variety of fresh ingredients, and cheese, before being grilled for five to seven minutes longer.

PIZZA ITALIANA
Even though Buenos Aires abounds in Italian influence, you can count on one hand the Porteño pizzerias that actually honor the traditional way to make pizza. While many locals reject the chewy-thin crust, flavorful sauce, and easy-on-the-cheese way of life, Italian styles like pizza napoletana and pizza romana are slowly capturing the hearts of those who truly appreciate quality ingredients over quantity of formaggio.