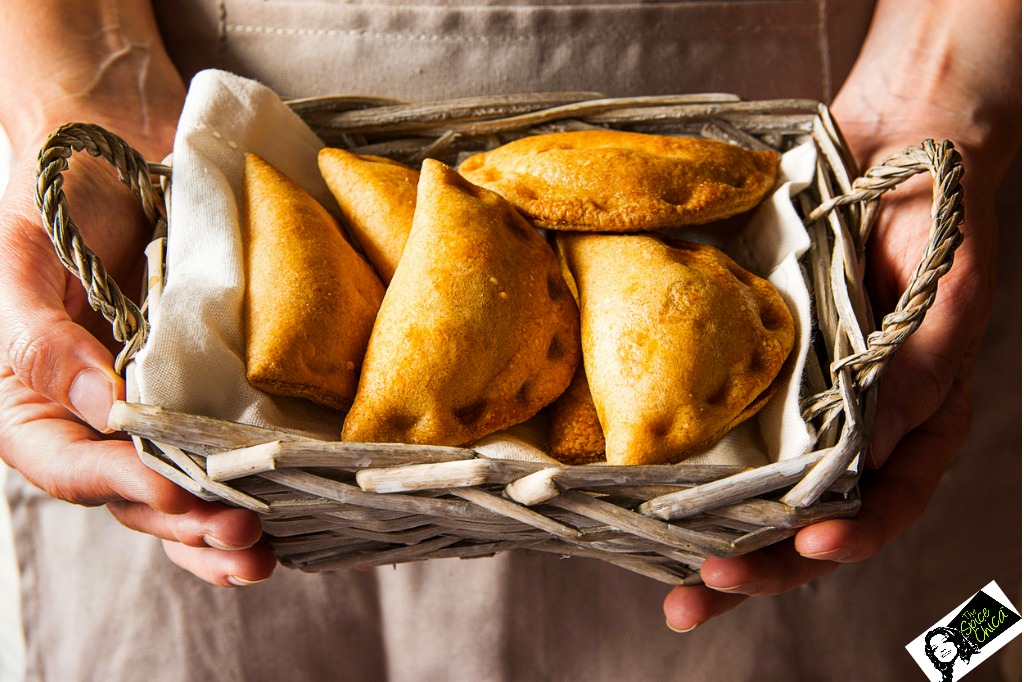 “Argentinian-style”, empanadas are actually originally from Portugal and the northwest region of Spain, called Galicia.The Spanish and Portuguese colonizers brought the empanadas to South America where it developed into what we know as Empanadas in America.
In Argentina, the cuisine we are exploring today, the dough is often made with wheat flour and lard. The most popular fillings are chicken and beef (cubed or ground, depending on the region), spiced with cumin and paprika.
You will also often see onions, hard boiled eggs, olives, corn, peppers and sometimes raisins in the filling!

Today we are frying them – Tucuman-style, which is the preferred type in Buenos Aires. However, you absolutely can bake it (Salta-style)

In the bowl of a stand mixer, combine the flour and the salt and mix until incorporated.
Add the cubes of cold butter and, using your fingertips (or a pastry blender), work the butter into the flour until the mixture resembles coarse meal.
In a separate bowl, beat the egg, ice water and white vinegar together.
Add to the flour/butter mixture and, using the dough hook, mix in the stand mixer just until the dough comes together. (You can also skip the mixer and do this by hand!)
Form dough into a flat disc and chill, wrapped in plastic wrap, for at least one hour.
After dough is chilled, divide into 12 equal parts and roll each part into a disc (1/8 inch thick). You can use a large cookie cutter to cut the disc into a better circle. I usually don’t worry about it, as I don’t mind my empanadas being different sizes! It gives them character! 🙂
Place the filling in the center of the circle and carefully fold the empanada into a semicircle.
Crimp down the edges with a fork. If necessary, wet your finger and rub it along the inside edge of the dough.
To fry the empanadas, heat vegetable oil (enough to cover the empanadas) to 360F degrees and fry the empanadas until golden, about 2 minutes per side. I like to add a few cloves of garlic to my oil. It makes the empanadas even more flavorful!
Transfer the empanadas to a plate lined with paper towel.
Serve hot!