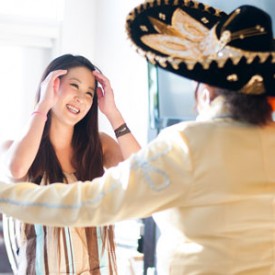 Tamales are perfect for breakfast or lunch, and they can be reheated quickly in the microwave. Once you learn how to make tamales, fill them with whatever strikes your fancy—barbecue pork, chicken salad, leftover roast chicken—anything at all. You can even make little appetizer-sized tamales.

Enjoy tamales with rice and beans for a meal, or by themselves, as a perfect grab-n-go snack.

Set the banana leaves out to thaw. If using corn husks instead, soak in very hot water for an hour to soften.

Make the masa: In a large bowl or the bowl of a stand mixer, beat the lard or vegetable shortening, cream cheese, and chili con queso until light and fluffy.

Add the remaining masa along with additional chicken stock as needed, beating well, until mixture resembles a thick cake batter. Season with salt and pepper to taste. Set aside.

masa mixture in a food processor

For the filling, stir together the grated cheddar and pepper jack cheeses with the salsa.

stir together the grated cheddar and pepper Jack cheeses with the salsa
Rinse and dry the banana leaves and cut them into rectangles about 8 inches by 10 inches in size (for medium tamales). Pat the corn husks dry, if using.

corn husks on a towel
Lay a banana leaf rectangle or corn husk on a flat surface. Place about 1/4 cup of the masa in the middle and spread into a rectangle about 2 inches by 4 inches. Spread 1 to 2 tablespoons of the filling in the center of the rectangle.

masa mixture and filling on top of a corn husk
Fold the sides of the banana leaf (or corn husk) in over the filling, closing the masa over the cheese filling.

rolled tamale on a concrete surface
Fold up the bottom half over the filling, then fold the top half down and roll the tamale until well wrapped.

folded tamale on a concrete surface
Tie the tamale with a piece of kitchen string or a strip of banana leaf to secure it. Repeat with the remaining ingredients to produce more tamales.

tamale wrapped and tied with a string
Bring 1 to 2 inches of water to boil in a steamer pot or in a large pot with a colander or steamer basket set inside. Fill the steamer with one layer of tamales (you may have to steam in batches). The tamales should be above the water; they are cooked by the steam only. Cover the tamales with a dish towel and the pot lid and steam for 30 to 40 minutes. Add water to the pot when necessary.

Quick and Easy Cheese Tamales in a steamer
Remove the tamales and serve warm. Enjoy!

Tips
Tamales can be reheated in the microwave.

How to Store and Freeze Tamales
Tamales can be stored in an airtight container in the refrigerator for up to one week.
Tamales can also be frozen. They will keep in the freezer for up to four months. Reheat them, from frozen, by steaming for 15 to 20 minutes, or by heating them in the oven, wrapped in foil.

Before you start, know that making tamales takes time, and needs patience, but rewards you with a beautiful and flavorful meal.

Making tamales is easy once you get the hang of it. Like crepes or pancakes, assume that the first one is the trial, and don’t feel bad if you have to discard it. The first tamale will teach you how much masa and filling you actually need to be able to fold and close it appropriately.

Our guide teaches you how to prepare the corn husks and assemble this delicious Hispanic dish. It may take you a little longer to make the first few, but after you learn the ropes, you’ll have a whole batch ready to steam.

What You Need to Make Tamales

To make tamales at home, you’ll need the following ingredients and tools:

Go through the corn husks and remove any debris. The husks can have dirt and hairs that need to be removed. Separate the larger usable husks from the smaller bits and pieces, but do save the smaller pieces for later. Smaller husks can be used as patches or cut lengthwise to make the strips to tie the tamales.

In many Hispanic cultures, they boil the corn hairs and make a hot tea out of them to treat urinary discomforts, but sipping it with honey is simply delicious.

Remove the husks from the water and pat dry. Place into a covered dish or a large plastic bag to prevent them from drying out. Use only the larger and medium-sized husks for the tamales. When looking at the husk, notice the shape.

They have a narrow end, a broad end, and two long sides, similar to a trapezoid.

While you soak the husk, prepare your filling and be sure it’s dense and doesn’t have any excess liquid.

Once your dough is well rested, mixed, and doesn’t stick to your hands, you are ready to spread it on the prepared husks. Follow the next steps:

Tamale fillings come in many flavors and levels of spiciness. Once you’ve chosen the one of your liking, be sure it’s not too hot to handle.

Spread a couple of spoonfuls of filling down the center of the dough, leaving at least one inch of dough around the sides.

Locate the long side of the husk with a 2-inch space that doesn’t have any masa. Fold that over, slightly overlapping the other side, so the edges of the dough meet. Press gently and make sure the filling isn’t leaking.

Wrap an extra husk around the back, so you have a tightly wrapped tamale.

Tie the Tamale Together

Create strips of husk by cutting or tearing 1/4-inch lengths off of some of the smaller or unusable husks. Use these to tie across the middle of the tamale to hold the flaps down. You may need to tie two strips together before tying it across the tamales, depending on how thick your tamales are.

You can also use kitchen twine to tie off the tamales. This option gives you the choice to better tie the tamales lengthwise and crosswise if they are too big.

Wrap an extra husk around the back, so you have a tightly wrapped tamale.

Set the tamales upright in a steamer. You can buy a large steamer made just for this purpose, but can also use any available large pot.

Keep a small amount of boiling water on the bottom of a pot and use a colander or mesh of some sort to keep the tamales away from the water. Cover the pot with a lid and steam for 90 minutes. Do not let the water boil up completely. Add hot water to the pot as necessary, but keep it away from the tamales.

Be sure to let the tamales rest for 1 full hour before serving them. By letting them rest, you are ensuring that the dough is firm and the filling is contained in it. If you really need to check one for doneness, wait at least 5 minutes before opening.

Serve with the husk if you are used to it, or unwrap and serve on a plate for less seasoned tamale-eaters.