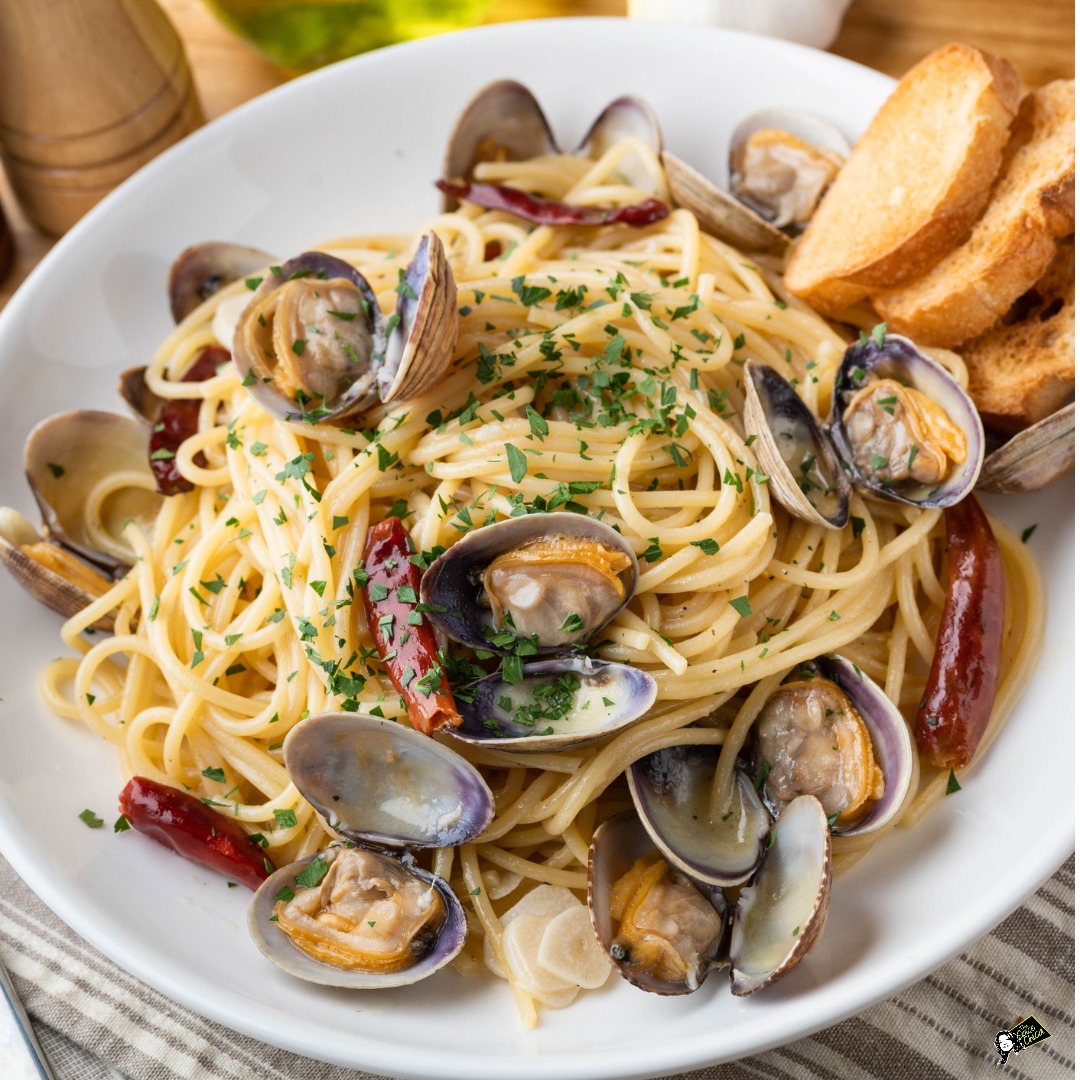 Of all the wonderful seafood pasta recipes there are here in Italy, pasta alle vongole is probably the top of the best seller list. Not surprising given how delicious this iconic Neapolitan dish is!  This is a dish that many people order in restaurants but rarely make at home. However, it’s actually pretty easy and there’s no residue fishy smell in the kitchen. What you’ll get is a wonderful garlicky aroma that is so mouth- watering!

Like many other similar dishes, pasta with clams is traditionally made in what Italians call a red or white version (rosso o bianco); in other words, with tomatoes or without.

The main ingredient for a ‘real’ pasta alle vongole is ‘vongola verace’ commonly known as the cross-cut carpet shell clam. This ridged shell clam is found both farmed and wild here in Italy, but I’ve read that the taste is the same as they eat only what’s in the sea. If you do find vongole veraci, they can be a bit more expensive than other clams. But they are worth it! However, apart from being really delicious, these clams are self-cleaning so they’re unlikely to have sand in them and make the dish much easier to prepare. Of course, many people make pasta alle vongole with other types of clams. The Manila clam, which many Italians call the fake ‘verace’, is widely farmed in the Adriatic sea and Sardinia. Consequently these are used by many cooks to make pasta alle vongole.
Manila clams look very similar to vongole veraci. Another popular clam is the rayed artemis clam. These are smaller, whiter and more rounded but still taste really good too! Of course it’s possible to use tinned clams, but in my opinion you won’t get anywhere near the same flavour, as with fresh clams.

Traditionally this recipe is made with spaghetti, vermicelli or linguine.

There are just 2 points that need care to make sure your linguine pasta alle vongole is perfect. Firstly, in this version the clams are cooked alone first. Then you will need to remove the meat from most of them, keeping just a few in their shells to make the dish look more appetizing! It’s important to discard any unopened shells as this means the clam is dead. Don’t try to open and eat unopened clams! Secondly, if the liquid from the clams appears to have sand in it then it’s best to filter it before adding the cooked clams and liquid to the rest of the sauce ingredients.

Remember to throw out any clams that don’t open during the first phase of cooking them.