Everything you need to know about the PAELLA 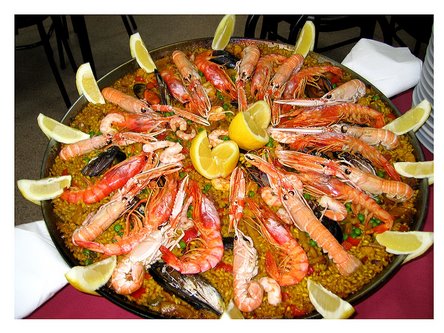 Paella is a Spanish rice dish that includes different combinations of vegetables and meats, characteristically seasoned with saffron, but also has other spices depending on the recipe and area in Spain it comes from.
Etymology
The dish Paella is said to to be a perfect union between 2 cultures from Spain , the Romans, for the pan and the Arab, that brought rice.
There is an old story of how the Moorish kings’ servants created rice dishes by mixing the left-overs from royal banquets in large pots to take home. It is said by some that that word paella originates from the Arab word “baqiyah” meaning left-overs.The term Paella actually refers to the pan that it is cooked in. All the way back to the ancient Sanskrit language the term Pa means …to drink, and the Roman culture from the latin made words like Patera, Patina , Patella which could mean a container to drink, or perform other culinary functions.
It would seem a natural dish, since rice is grown in Spain, and all meats, and seafood in some regions are plentiful, that this dish would be a natural. Since there are many workers in the fields, cooking it over an open fire also would be the most practical. Spain is not known for forests and lots of timber, so the small available twigs and branches from pruning that are green gave a quick hot fire instead of a slow burning one from logs. So the size of the pan grew instead of the depth, so you could get a hot fire a maximum evaporation.
Most experts agree that the dish was developed in the Spanish city of Valencia.

Valencia is where the Romans introduced irrigation and then the Arab conquerors that brought rice, prefected it. Many folks say the best Paella and most authentic still comes from Valencia.
Also in Islamic Andalusia Spain symbolic dishes with rice and different meats and vegetables like a casserole were cooked for special occasions. Some of these dishes may be the roots of some of the Paella recipes.
The Special Pan 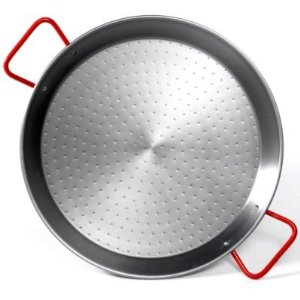 The Paella pan is characterized by being round with a flat bottom. The pan can be anywhere from a LP record 12 inches in diameter to several feet. The one thing that doesn’t change is the height. It is about first joint in the thumb deep as the Spanish would say, so that the rice has maximum contact with the bottom of the pan. 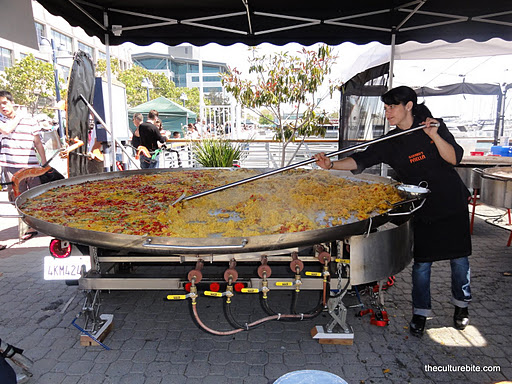 It evolved this way, starting with a rounded bottom, designed to hang over a fire. My guess is that as soon as some sort of grill or flat top burner was invented that the pans started to become more flat bottomed.
I use to think when looking at Paella that it was just the Spanish version of Jambalaya, or the Italian Risotto. While there are similarities they really are quite different.
Traditionally Jambalaya is cooked in a round pot over a fire, and Paella is cooked in a flat pan over high heat.
Why the dimples in the pan ? Good question. The dimples serve several functions. They trap small amounts of liquid and thus promote even cooking, they make the pan rigid, and they prevent warping. They’re also a nostalgic reminder of the days when paella pans were hand hammered. Some people claim that the dimples keep the rice from sticking to the pan, but I’m (Sarah Jay) not convinced. For one thing, rice sticking to the bottom of the pan is not something you want to avoid, since it helps foster one of the most succulent and seductive aspects of paella, something called socarrat ( the crusty bottom layer of rice)
Cooking Paella over Fire
The Paella traditionally is cooked over an open fire. The Mediterranean is known for developing the art of frying, because of the lack of good slow burning firewood. The available branches were of high acid content that made a very hot fire.
The Rice
Two types of rice of Spain is small rounded medium size grains that absorb the flavors and stock well, but keep their shape. This is different than the rice for Risotto that breaks up a bit and develops a creamy texture. The most popular rice is Bomba rice.
The Meats and Vegetables Depending on the region in Spain , the meats and vegetables added to the Paella vary. Paella can have several or no meats in it, here are a few of the traditional ones. Rabbit, or chicken, snails, Spanish smoked sausage like Chorizo. Snails are common. Seafood can be shrimp, mussels, clams, lobster and crab.
Vegetables onions and garlic are a must, and very often you will see fresh peas or beans as a garnish. Artichoke quarters and red bell peppers are often used.
The Seasonings.
Saffron is seen on every Paella recipe that I have looked at. It gives not only a nice background flavor that is earthy, but a nice color.
Garlic is a must and often you see Spanish paprika, many chefs recommend the smoked paprika.
The Style it is Eaten in
Paella is served family style traditionally in Spain on a round table with the pan in the center. Usually eaten right out of the pan and not on plates. This way you don’t over mix the congealed structure of the rice too much by agitation. Each guest starts at the perimeter of the Paella and works toward the center. Lemon wedges to accent the flavor. 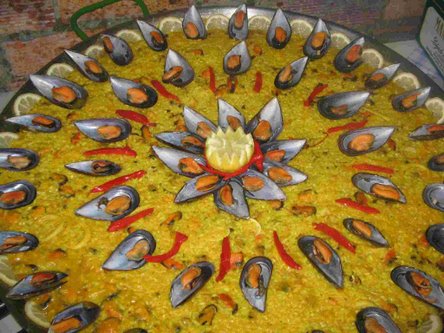 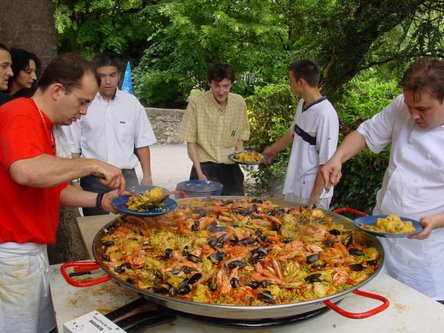 courtesy of the culture bite