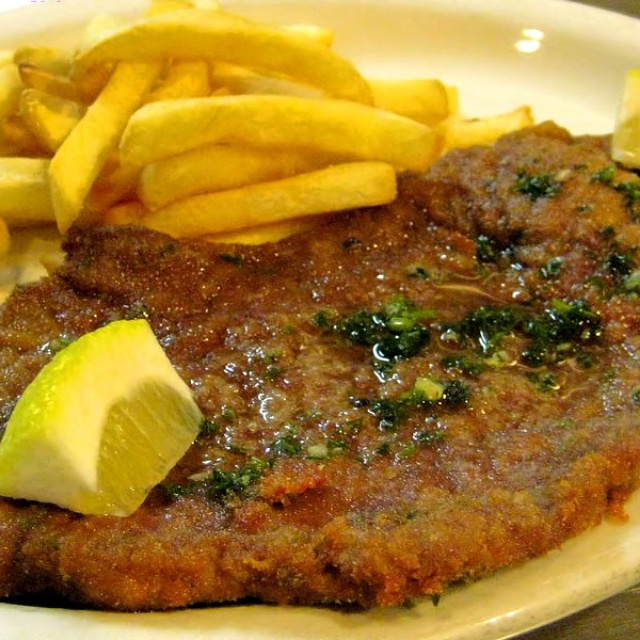 When you think of meat in Argentina most likely the first thing that comes to mind is parillas and asados. Which is for very good reason because it’s done great and it’s a part of the culture. But another common preparation of meat shared by most of the world also has a special place in the cuisine of Argentina; the Milanesa.

Milanesa is similar to a schnitzel or chicken fried steak. Sure the basic preparation of the milanesa may be similar to places around the world but the accompaniments it can be served with around South America offer an unique change from the chicken fried steak and sausage gravy you would find in American diners.

Usually prepared with meat such as beef (nalga cut) and chicken and in some cases vegetarian, made with soy or eggplants. It is frequently served around Argentina with french fries (papas fritas) or mashed potatoes (pure de papas).
Milanesa a la napolitana is a very common preparation in Argentina which is usually topped with ham, tomato, and cheese. The milanesa has many different varieties and is eaten by locals as far north as Mexico and southern United States. In many countries it is eaten as a sandwich known as a sandwich or emparedado de milanesa which comes with the local condiments (i.e. mayonnaise, tomato, cheese, eggs) and is very commonly eaten at home for its cheap and easy preparation. The Milanesa can be very similar to a lot of dishes around the world, such dishes like the classic cordon bleu is eaten in Chile but under a different name of Milanesa Kaiser, or escalopa.

Many think, Milanesas is thought to have came over with the Italian immigrants during the Italian diaspora between 1880-1930. Cotoletta alla milanese is what it was known as back then which is also said to be the dish that Schnitzel came from. The Italian immigrants arrived to Argentina and brought with them their culture which had a huge impact on the local culture.

In Argentina milanesas are sold at most butchers (carnicerias) in a number of varieties.
How to prepare the meat yourself:
Choose your meat and cut it into ¼ inch (1ish cm) slices. You want quite a big surface area so cut your meat on an angle. Place this between 2 sheets baking paper (papel manteca as it’s known here) and start beating it with either a hammer or a flat heavy object (my favorite is a skillet). You want to get the meat quite thin (⅛ inch or so) you’re going to shallow fry it in oil with bread and you want the outer layer of breadcrumbs brown and the meat on the inside to be cooked at the same time.
Next get yourself set up to crumb the meat (french known as a pane in Spanish known as rebozar) this involves flour in one dish(can be seasoned with any variety of herbs and spices), well beaten eggs (you can add water to make it go further) in another dish, and bread crumbs (el pan rallado) in another dish. Coat your protein in the flour so that it’s all covered and give it a shake to get rid of excess flour, dip in the beaten eggs and finally into the breadcrumbs pressing the bread into the meat as to coat very well.
Some may leave it in the fridge to have the bread absorb a bit of moisture changing the consistency of the outer crust but it’s up to you to play around and find what you like.
Heat about a cup of oil (any oil i like rapeseed as it’s cheap and has a high burning temperature) in a flat pan to around 170 C (338 F). More oil will not hurt it, you can even deep fry it, place it in the pan and it should bubble and fry moderately quickly (but not too quickly, again you want the meat and the breadcrumbs to reach the desired cookness at the same time).
Drain onto a paper towel and serve with whatever you want! My favourite Napolitana is quite easy to prepare, simply cover with ham, mozzarella, and sliced tomatoes and bake in the oven until melted.